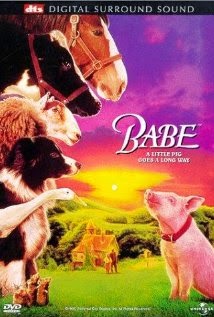 Would you enjoy escaping the snow for a few hours? Luckily you have come to the right place. The Children’s Museum in Easton has created a list of movies that will have your whole family laughing, during these wintery times. You will enjoy the laughter these seven movies will bring to your family, as we have done extensive research.
_____________________________________

“Dearie me! If it’s not a duck that thinks it’s a rooster, it’s a pig that thinks it’s a dog!”
Filmed in the greener pastures of Australia, the story of Babe (1995) is able to warm the hearts of those who watch this family friendly movie. Babe (a pig) is taken in by sheepdogs, and learns how to herd sheep with the help of Farmer Hoggett. Babe is able to form lifelong friendships, and creates his own family on the farm.

“Aristocats do not practice biting and clawing, and things like that. It’s just horrible.”
In Aristocats (1970), four cats (Duchess, Berlioz, Toulouse, and Marie) are taken away from their owner after their Butler kidnaps them. Finding themselves lost and away from home, these four cats befriend a tomcat and will work together to get back home to Paris. As Duchess and her children try to get home, they are able to make friends with other animals on their journey.

“I think I have a plan here: using mainly spoons, we dig a tunnel under the city and release it into the wild.”
In this animated feature, Monsters Inc (2001), tells a story of monsters living in Montropolis. Living in a different dimension, away from blizzards and the majority of the cold weather we are dealing with, Monsters must power their city, from scaring children. When friends Sully and Mike Wazowski find that they have an unexpected stowaway, they must rush to help a little girl (Boo) get back home. Sully and Mike soon find that Boo will teach them more about living than they ever could have imagined.

“Oh my gosh, Nemo’s swimming out to sea.”
Finding Nemo (2003) is about Nemo, a clownfish, who is captured in the Great Barrier Reef, and taken to Sydney, Australia. Nemo’s father, along with his friend Dory set out to rescue Nemo, and bring him back home. This animated movie really captures the spirit of friendship, determination, and love. After seeing this movie, you will want to go to Australia.

“How an elephant got in my pajamas, I shall never know.”
In this family friendly movie, Chitty Chitty Bang Bang (1968) tells the story of an inventor, Mr.Potts and his two children, who have been struggling to make ends meet. When his children ask him to buy a car they see, Mr.Potts makes their dream come true. While on a picnic, he tells a story to his children, about a country called Vulgaria, and a ruthless dictator that is trying to steal their car that they named Chitty Chitty Bang Bang.

Willy Wonka and the Chocolate Factory (1971)

“Violet! You’re turning violet, Violet!”
Willy Wonka and the Chocolate Factory (1971), tells the story of a boy named Charlie. Charlie is granted the chance of a lifetime, when he finds that he bought a candy bar with a golden ticket, allowing him to enter one of the best candy factories in the country. This story captures the love between Charlie and his family, as he goes on an adventure in a world full of candy.