On Friday, April 8, our Around the World passports brought us to Russia, the largest country in the world. Russia occupies one-tenth of all the land on Earth and spans 11 time zones across two continents (Europe and Asia). It comes as no surprise that Russia holds 9th place for most populated country with 141,927,297 people! With so much land, it’s no wonder why Russia his home to a large number of ecosystems and species. Its forests, steppes, and tundras provide habitat for many rare animals, including Asiatic black bears, snow leopards, polar bears, and small, rabbit-like mammals called pikas.
This exciting country comes with a lot of culture. Luckily we had Kathleen from the Russian American Cultural Center in Boston to share fun facts and yummy foods. 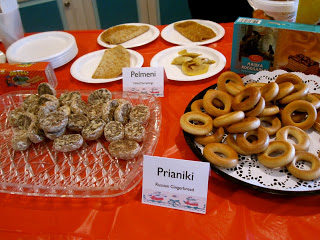 Kathleen shared a wide spread of traditional Russian treats, that she enjoyed during her five year residency in Russia.Samovar – Used to provide boiling water for a variety of domestic purposes including making tea.Prianiki – A Russian favorite, ginger bread made of flour, honey, and sometimes egg.Blini – Similar to a thin pancake but usually served with sour cream, jam, honey, or caviar. Can also be served as a crepe with fillings such as cheese, chicken, or fruit!Russian Chocolates – One of the best-known chocolates since there is an entire chocolate tradition!Pelmeni – Dumplings filled with a meat or fruit, wrapped in a thin dough. 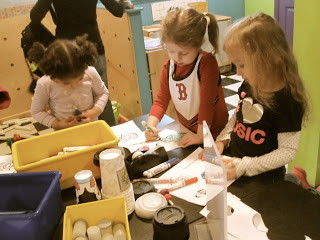 Have you ever seen a matryoshka doll? They are a set of Russian nesting dolls made out of wood. Each wooden doll separates, top and bottom, to reveal a smaller doll inside. There are typically at least five dolls in a set but there can be many more. Typical matryoshka are painted to resemble peaseant girls but animals and Russian leaders are also popular. The word matryoshka means “little matron.” The kids were able to make their own matryoshka dolls out of paper cups, as well as find the fifteen dolls hiding around the museum. They also designed and decorated their own tops for spinning!

Did you know that Jean Baptiste Lande was one of the first instructors of ballet and brought his students to Russia to perform for the Empress Anna? The students put on such a spectacle for the Empress that she decided to start a ballet school in Russia in 1738. This school was known as the Imperial Ballet School, and later became known as the Vagonova Academy under the direction of Agrippina Vaganova. Catherine the Great also started a ballet school at an orphanage in Moscow in the late 1700s. In honor of Russia’s dancing routes, our intern Jennifer Moson, taught future ballerinas basic ballet positions.

Posted in Uncategorized
← The Luck of the IrishExploring Music →