Whew, what a week! We’ve been having a terrific time here during February Vacation and boy has it been busy. Operation Espionage has been wicked fun. Our detectives have done an excellent job deciding who the culprit was by carefully following the clues that were left around the museum! We’re still investigating the crime for a couple more days so stop by and help us solve the crime of the Ice Cream Cone Caper! We’re also having some fun other activities going on throughout the museum like our spy viewers and a fingerprinting activity, not to me 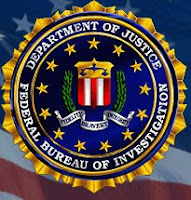 Today, we had a visit from a real FBI agent! He stopped by this afternoon and told us all about his exciting job. Special Agent Josh brought in TWO bullet-proof vests for everyone to try on as well as some plastic handcuffs he uses while catching bad guys. He was full of neat facts about the FBI that many of us never knew about. For instance, did you know that since 1940 the FBI has been in charge of catching spies that sneak into the United States? Pretty cool huh?! Special Agent Josh even helped some of our detectives with the clues from case of the Ice Cream Cone Caper. If you’d like to learn even more about the FBI drop by the FBI Kids Page. Everyone at the museum is very thankful to both Special Agent Josh as well as the FBI for stopping by.

It’s a bird, It’s a plane, No its SUPERNANNY! That’s right, everyone, Jo Frost, the star of ABC Television’s Supernanny was filming in the area and just made a stop right here at the The Children’s Museum in Easton. It was so neat seeing how a real television show is filmed. Everywhere we looked there seemed to be T.V. people all working together to film just one part of an episode! It’s definitely a hard job, but it looks like it must be really exciting. I’m excited to watch the show when it airs and see our museum on national television. I’ll be sure to post the airing date of the episode once the television people let us know so you guys can watch it too.

Posted in Uncategorized and tagged School Vacation Week, SUPERNANNY
← What to do During February Vacation WeekMarshmallow Towers →