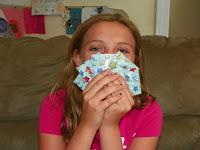 “Opa is the old maid!” one of the kids calls as we play with our favorite set of playing cards. The idea for this homemade set of cards with a personal family touch came from an article I had seen in a magazine when my middle child was one year old. The magazine suggested using double prints of family photos to play a memory game which would help your young child remember their long distance relatives and friends. We improvised with the idea, and eight years later the entire family is still having fun playing with our homemade cards.

I began making the cards by taking a photo of each our family members and friends at a holiday celebration. After getting double prints of the roll of film (this was back before we had a digital camera) I cut the photos to a more manageable 2”X 3” size, put scrapbook paper backing on the pictures a 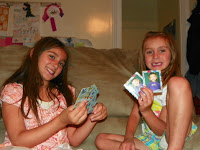 nd laminated them. Over the years we have used our photo cards not only to play Memory, but also to sort people by family and to play Go Fish and Old Maid. Somewhere along the line we lost one of the Opa cards, so when we play Old Maid, Opa is the old maid, which always brings great laughs! We have had to add cards for a new sibling and cousin, which was like a rite of passage for them to be added to the family card game. Now that the kids are all older we love looking at how cute they all were when they were younger. And if some day one of the grandparents should pass away, he or she will still be there playing cards with us.