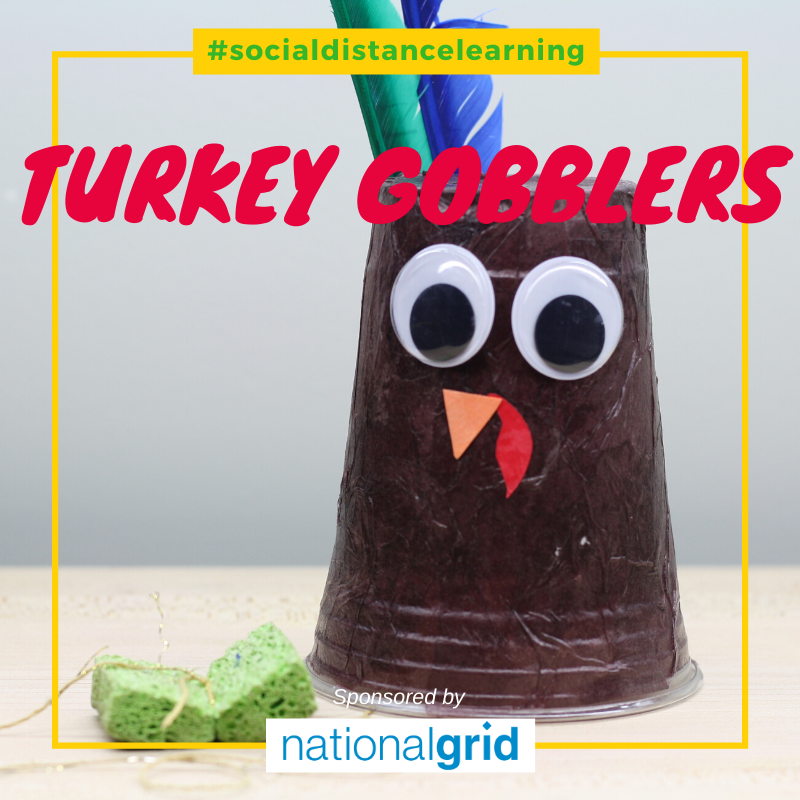 Today’s Project: Turkey Gobblers
Video Tutorial: turkey gobblers
Traditionally this has been a fun Thanksgiving craft, but you can get creative and adapt it to the season. For example, you could use a green cup and it can become a bullfrog croaking in the springtime sun. Use a white cup and turn it into a wailing ghost during Halloween. Be imaginative!
YOU’LL NEED:
A heavy duty paper or plastic cup, construction paper, wiggly eyes, glue, scissors, monofilament, and a sponge.
DIRECTIONS:
1. Poke 2 small holes in the bottom of the cup (an adult’s job) with scissors or an awl.
2. Cut a length of filament about 18” long. Feed one end through the holes and tie a knot, leaving as small a tail as possible on one side. You can add a piece of tape inside the cup to secure the knot.
3. Cut a sponge in thirds. At the other end of the monofilament, pull it as hard as possible as you tie the knot at the center of the sponge. It will be pinched in the middle but that’s fine.
4. Flip the cup over and begin decorating it. If you are making a turkey, you might want to use colorful feathers for the tail. If it’s going to be a frog, maybe using a couple green pom-poms will work as enlarged eye casings. If it’s going to be a ghost, drape the cup with a piece of tissue paper or a paper towel and glue it in place.
5. When you are done decorating, lightly dampen the sponge, fold it in half and pinch it at the top of the monofilament. Squeeze the sponge tightly as you pull it down the length of the filament. It will make a gobbling sound!
THE SCIENCE BEHIND IT:
Friction produces the sounds you hear. Experiment with the pull speed and technique to get the sound you like. What happens when you pull the sponge down with a short, jerky motion?
Sponsored by National Grid.