Summer is finally over, and this past weekend we celebrated the transition into Fall in a big way! On Sunday September 19th, we had a lot of Fall-themed activities and projects to kick off the season. The biggest attraction was the Scarecrow Stomp, where families brought in their old and used clothing and turned them into some very creative scarecrows! There was plenty of hay to use (which created a miniature playground for the kids), as well as other arts and crafts materials to bring the scarecrows to life. At the end of the day, there was a whole collection of artistic scarecrows, and every family got to bring theirs home. 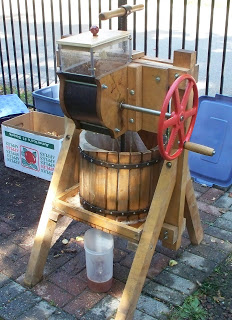 Next to the scarecrows was an all-time Fall classic: apple cider. No, not the kind you get at the store… apple cider made from freshly squeezed apples! While some of our volunteers cut up a whole bunch of apples, kids got to put the sliced remains into an antique pressing machine, then watch as the apples were crushed into a pulp, and the juices flowed into a container below. It was a delightful insight into how apple cider was made in the old days, and the kids thoroughly enjoyed it! Nothing better than a history lesson that you can drink afterwards! 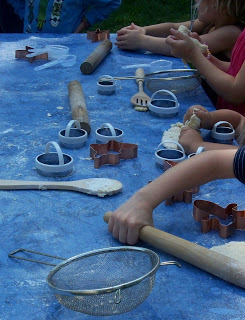 The other food-related blast to the past was Johnny Cakes, a Colonial delicacy. These cakes were made from corn and corn meal (ground corn kernels.) The Native Americans taught the early settlers how to make these corn-bread pancakes. These were very easy to make (because corn was easy to grow and grind) and the pilgrims used them at almost every meal.
The recipe is also very easy. The ingredients are:
-1 cup cornmeal
-½ teaspoon salt
-1 cup boiling water
-½ cup milk.

Mix the cornmeal and salt. Add the boiling water, stirring until smooth. Add the milk. Stir well. Grease a heavy, 12-inch frying pan. Set over the medium-low heat. Drop teaspoons of the batter onto the pan. Cook until golden, about five minutes. Turn the cakes carefully with a metal spatula. Cook the other side five minutes. Serve the first cakes hot with butter and maple syrup. 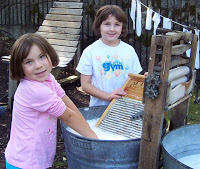 The third history lesson came from the Wringer Washer, an antique device used to do the laundry. The kids couldn’t stop playing with the device as they rolled socks in the dirt and mud, washed them in the basin, scrubbed them against the washboard, rolled them through the squeezer, then hung them up to dry… only to repeat the process again and again! 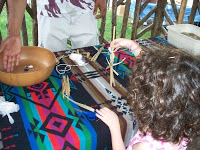 The last history lesson came from Annawon Weedon, who brought his fascinating Native American arts and crafts projects and games. Among the arts and crafts projects were corn dolls, easy-to-make dolls made from strands of corn stalk. There was also an old Native American game, a game that originated the common phrase, “What’s all the hubbub?” This game consisted of a giant bowl with colored seashells in it, and the idea was to shake and slam it on the table, and you’d get points based on which sides of the shells are facing up or down. The most interesting part of the game is that you played with an opponent, whose job is to distract you by shouting while you’re slamming the bowl. 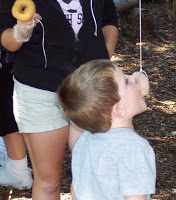 What’s more frustrating than eating a messy, powdery donut? How about eating a messy, powdery donut hanging on a string- without using your hands? Kids delighted in this appetizing challenge as they attempted to devour a donut, hands-free. It’s not as easy as it sounds! Needless to say, there was many a satisfied, yet powder-faced kid walking away from that activity!

Hay is fun. Not many kids see it on a day-to-day basis, but it’s fluffy and interesting and makes you want to jump into it. That’s exactly what some kids did, as in between activities they could make a mad dash, jump through a hula hoop, and make a crash landing on a safety pile made of hay. It was a great way for many of the kids to let out some of their pent up energy, and always amusing to see some kids make very elaborate dives in the air. 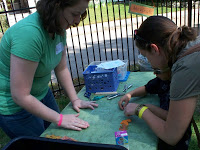 The last of the activities was an interesting arts and crafts project. In order to prepare for the season, kids got the chance to design and make their own leaf-hanging decorations. Clear fabric pieces in the shape and colors of leaves were stuck together, and they could be brought home and hung in windows and elsewhere in the house.

The Scarecrow Stomp is only the beginning of the Fall events. Keep coming in on the drop-in days to see Trucks on Tuesdays, Exploring Music and Simple Science, Animal Happenings on Thursdays, and Friday Frolics. Mark your calendars for the Halloween Romp on Saturday, October 16th. Be sure to buy your tickets in advance! 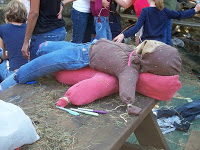 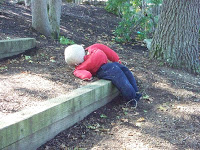 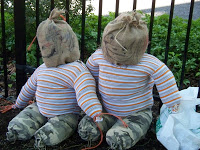